Is There a Role for Glutaredoxins and BOLAs in the Perception of the Cellular Iron Status in Plants? 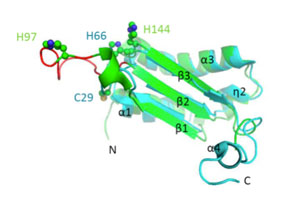 Glutaredoxins (GRXs) have at least three major identified functions. In apoforms, they exhibit oxidoreductase activity controlling notably protein glutathionylation/ deglutathionylation. In holoforms, i.e., iron–sulfur (Fe–S) cluster-bridging forms, they act as maturation factors for the biogenesis of Fe–S proteins or as regulators of iron homeostasis contributing directly or indirectly to the sensing of cellular iron status and/or distribution. The latter functions seem intimately connected with the capacity of specific GRXs to form [2Fe–2S] cluster-bridging homodimeric or heterodimeric complexes with BOLA proteins. In yeast species, both proteins modulate the localization and/or activity of transcription factors regulating genes coding for proteins involved in iron uptake and intracellular sequestration in response notably to iron deficiency. Whereas vertebrate GRX and BOLA isoforms may display similar functions, the involved partner proteins are different. We perform here a critical evaluation of the results supporting the implication of both protein families in similar signaling pathways in plants and provide ideas and experimental strategies to delineate further their functions.