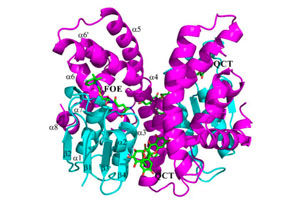 Glutathione transferases (GSTs) belong to an ubiquitous multigenic family of enzymes involved in diverse biological processes including xenobiotic detoxification and secondary metabolism. A canonical GST is formed by two domains, the N-terminal one adopting a thioredoxin-fold and the C-terminal one an all-helical structure. The most recent genomic and phylogenetic analysis based on this domain organization allowed separating the GST family into 14 classes in terrestrial plants. GSTs are further distinguished based on the presence of the ancestral cysteine (Cys-GSTs) present in thioredoxin family proteins or on its substitution by a serine (Ser-GSTs). Cys-GSTs catalyse the reduction of dehydroascorbate and deglutathionylation reactions whereas Ser-GSTs catalyse glutathione conjugation reactions and eventually peroxidase activity, both activities being important for stress tolerance or herbicide detoxification. Through non-catalytic, so-called ligandin properties, numerous plant GSTs also participate in the binding and transport of small heterocyclic ligands such as flavonoids including anthocyanins and polyphenols. So far, this function has likely been underestimated compared to the other documented roles of GSTs. In this review, we first inventoried Ser-GSTs in various photosynthetic organisms including algae before describing their reported biochemical and structural characteristics and associated cellular functions.